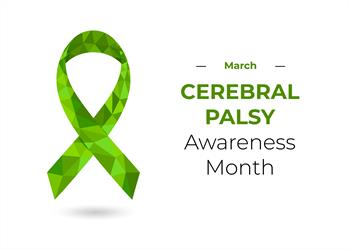 Were you aware that March is nationally recognized as Cerebral Palsy Awareness Month? Cerebral palsy is a serious condition that affects body movement and muscle coordination, the severity of which can vary significantly in each case. This condition can be life-changing and debilitating, but individuals living with cerebral palsy know that it is possible to live a happy, successful, fulfilling life all the same.

To honor children and adults living with this condition, and the families who love them, March aims to raise awareness and support for cerebral palsy. Since its creation in 2005, Cerebral Palsy Awareness Month has been a useful tool in educating the public about cerebral palsy, raising awareness, and gathering funds for research and care. To learn more about this condition, read below.

Cerebral palsy is a neurological disorder that can cause poor muscle movement, speech impediments, posture issues, and other coordination problems. These issues are neurological, which means they are the result of brain damage. In many cases, cerebral palsy is the result of some severe brain damage that occurred during the child’s birth, before birth, or shortly after delivery. These injuries can cause abnormal brain development, which then results in neurological disorders.

Some individuals with cerebral palsy suffer minor muscular issues, while others are bound to wheelchairs. Usually, cerebral palsy is diagnosed in the hospital directly after the birth, or shortly thereafter. A child who suffers a brain injury during delivery, or one who is harmed due to a severe infection, fetal distress, or some other issue could suffer brain damage as a result. If your child was taken to the NICU after birth for extra care, or if the doctors ordered MRIs or other scans to check for brain damage, you may be concerned about your child developing cerebral palsy.

If cerebral palsy isn’t identified directly after the baby sustained brain damage, the effects of cerebral palsy can become apparent when parents notice their children missing developmental milestones later on down the road. For example, a baby with cerebral palsy might be stiff or could have lagging movements in his or her head and legs. Babies with cerebral palsy often do not lift their heads, and have difficulty rolling over, sitting up, and communicating at the same rate other babies do.

Although cerebral palsy is incurable, it can be treated with physical, occupational, speech, and water therapies, depending on each individual’s needs. Unfortunately, because treatments are ongoing, caring for a child with cerebral palsy can be extremely expensive and time-consuming.

Just as pink is the color used to represent breast cancer, green represents cerebral palsy. Green is commonly associated with new life, growth, and nourishment, which seems fitting given the nature of cerebral palsy. Cerebral palsy manifests in childhoo, and is often the result of serious birth injuries. As such, it comes as no surprise to learn that the color associated with this condition also signifies such fresh, youthful values.

Was Your Child Injured?

If your child suffered a brain injury during the birth process, you might be wondering if he or she could develop cerebral palsy. Or, you may notice your child has missed key developmental milestones, which has you questioning whether he or she suffered an injury during birth that you weren’t aware of.

In any case, if you suspect your child may have developed cerebral palsy, you need to consider whether someone else was to blame. Medical errors, such as missed diagnosis, surgical mistakes, C-section errors, delayed C-section, forceps and vacuum injuries, prolonged labor, unrecognized fetal distress, and other childbirth complications could all cause cerebral palsy. If you think your child may have developed cerebral palsy because of someone else’s medical mistake or negligence, our firm can help.