Oxygen loss is one of the main complications that can arise during childbirth, particularly if the pregnancy is classified as “high-risk.” The more technical and medically-accurate term for a lack of oxygen is Hypoxic Ischemic Encephalopathy, also known as HIE. When the baby is deprived of oxygen for too long, it doesn’t just put the pregnancy at a higher risk: It can cause the child to sustain an array of medical conditions and lifelong disorders.

Because April is HIE Awareness Month, we’re reviewing some of the most important things you need to know about this common and painful birth injury. If your family has suffered painful losses and extreme medical expenses after an HIE diagnosis, our doctor-lawyer team at Cullan & Cullan can help you begin to set things right, by pursuing full recovery from the negligent physician.

The Lifetime Impact of HIE

HIE can be caused by a bewildering number of doctor mistakes and pregnancy-related conditions, from placental and uterine tears to breech presentation births. Regardless of how the lack of oxygen began, though, HIE is a major medical emergency and often requires an immediate C-section. When an attending physician fails to act quickly on this knowledge, or does not properly diagnose HIE at the time it happens, severe infant brain damage and even death can be the result. Despite advances in brain injury treatment such as infant head cooling, HIE puts your child at risk for a range of cognitive problems and disorders.

Even if corrected in time to save the baby’s life, HIE can cause the following issues: 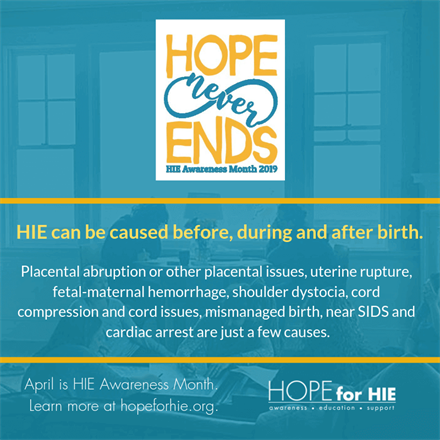 Even in the United States, HIE affects nearly 3 in every 1,000 live births, making it the most common form of neonatal brain injury. According to the World Health Organization, it’s also the 5th leading cause of death for children under 5, and up to 60% of survivors have some form of disability made apparent by the age of 2.

To spread awareness for this condition, the Hope for HIE organization is hosting a global campaign on social media and in communities across the world. Called “Hope Never Ends,” this campaign aims to boost international support for HIE victims, and to provide affected parents with a safe place to share their stories and advice. Offering a range of resources, community programs, and printable resources, the Hope Never Ends campaign may be a powerful tool for families seeking answers on their HIE journeys.

For more information, check out the Hope for HIE Resources page here.

Fighting for Children Affected by HIE

Although not all cases of HIE are easily solved by a physician’s vigilance, the vast majority of these cases result from a failure to diagnose HIE in time, or to properly account for a high-risk pregnancy early enough in the process. Whether your baby’s HIE injury was sustained because of high blood pressure and preeclampsia or a misplaced umbilical cord, the doctor may be partially responsible for the ensuring injuries – and you may be able to hold them accountable for your child’s financial and medical needs, too.

Ready to speak with our skilled birth injury lawyers? Contact Cullan & Cullan at (816) 253-8606 for a consultation in Kansas City and surrounding areas.